Turkish lira banknotes at a currency exchange in Ankara. An unexpected change at the head of Turkey’s central bank caused a steep drop in the lira’s value.Credit…Murad Sezer/Reuters

Turkey’s currency tumbled on Monday after President Recep Tayyip Erdogan fired the head of the central bank, who had been in the job just four months and had pursued policies aimed at taming inflation. The Turkish lira plunged 10 percent against the U.S. dollar.

Wall Street stock futures were higher, and stock market indexes were mixed in Europe in Asia.

The removal of Turkey’s central bank chief, Naci Agbal, signals a return to the unorthodox policies that Mr. Erdogan has long favored, such as cutting interest rates to lower inflation, but which most economists regard as counterproductive. Mr. Erdogan has repeatedly meddled in the central bank’s activities and over the years traders have dumped the lira.

Since his appointment in November, Mr. Agbal has raised the central bank’s benchmark interest rate from 10.25 percent to 19 percent in an effort to slow the overheating economy, control inflation and lure in foreign investment. He had succeeded in pulling the lira up from its record low. The most recent increase in the benchmark rate was on Thursday and he was fired on Friday.

The annual inflation rate was officially 15.6 percent in February but is probably much higher.

The new central bank chief, Sahap Kavcioglu, a university professor and former member of Turkey’s National Assembly, said in a statement that he would continue to fight inflation. But on Monday, the lira was trading at about 7.93 to the dollar, compared with 7.22 on Friday. The plunge in value was a sign that currency traders expect him to bow to pressure from Mr. Erdogan to cut rates, worsening the inflation problem and pushing the country of 82 million people closer to economic collapse.

“We have abandoned our cautiously optimistic view on the lira,” Piotr Matys, a strategist at Rabobank wrote in a note. Mr. Kavcioglu’s comments suggest he is clearly in favor of lower interest rates to stimulate growth, he added. 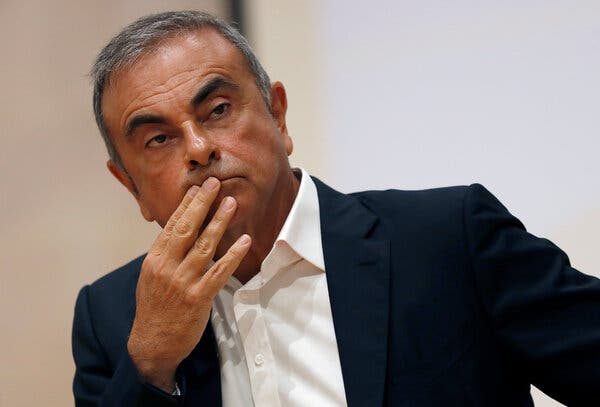 Carlos Ghosn, the former chief executive of Nissan, is a fugitive after fleeing Japan, where he was facing charges of alleged financial misconduct, which he had denied.  Credit…Hussein Malla/Associated Press

Tokyo prosecutors on Monday charged two Americans with helping Carlos Ghosn, the former Nissan chief, jump bail in Tokyo, where he was awaiting trial on four counts of financial wrongdoing.

Japanese prosecutors said in an indictment that the two men, Michael Taylor, 60, a former Green Beret, and his son Peter Maxwell Taylor, 27, assisted Mr. Ghosn’s efforts to escape the country, helping him flee to Turkey and then on to Lebanon, where he has been beyond the reach of Japanese law.

American officials arrested the men last May in Massachusetts. Earlier this month, they were extradited to Japan, where they have been held in a Tokyo detention center while undergoing questioning by prosecutors. A third man believed to have aided Mr. Ghosn’s escape remains at large.

The Japanese authorities have accused Michael Taylor of helping Mr. Ghosn travel by train to the western city of Osaka, through security checks at a private jet terminal and then onto a plane bound for Turkey. Once there, Mr. Ghosn transferred to a flight bound for Beirut. Peter Taylor assisted in planning for the escapade, visiting Mr. Ghosn several times before the escape, officials say.

Mr. Ghosn and his son, Anthony Ghosn, paid more than $1.3 million to the Taylors and a company they controlled, U.S. prosecutors have said in court filings.

Mr. Ghosn’s case raised international concerns about what some critics call Japan’s system of “hostage justice,” which includes lengthy detentions of criminal suspects without charge. While in the United States, the Taylors fought a long legal battle to prevent their extradition, with their lawyers arguing that they could be subjected to harsh conditions in a Japanese jail. 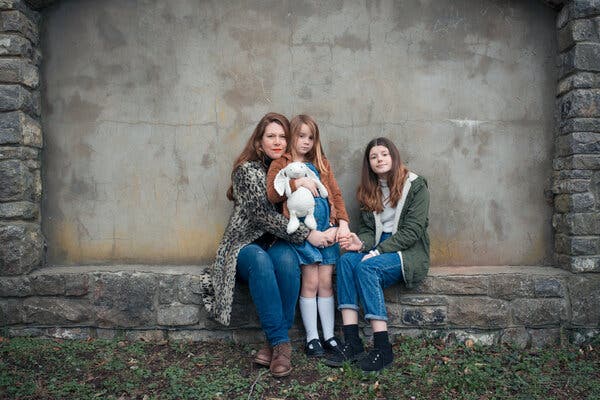 Jessie Astbury Allen with her daughters Mae, 7, and Livia, 12. They left China more than a year ago; Ms. Astbury Allen’s husband is still there.Credit…Francesca Jones for The New York Times

For the past year, people trying to go to China have run into some of the world’s most formidable barriers to entry. To stop the coronavirus, China bans tourists and short-term business travelers outright, and it sets tough standards for all other foreigners, even those who have lived there for years.

The restrictions have hampered the operations of many companies, separated families and upended the lives of thousands of international students, report Sui-Lee Wee and Keith Bradsher for The New York Times. Global companies say their ranks of foreign workers in the country have dwindled sharply.

Officials regard travel restrictions as crucial to their success in containing the virus. Since the outbreak started, China has reported more than 101,000 Covid cases. Although questions have been raised about the accuracy of the numbers, they are far lower than in the United States, where 29.8 million people have tested positive for the virus.

China’s tough restrictions, including its recent ban on dependents, have exacted an emotional toll on some families who have been forced to live apart for months.

In February of last year, Jessie Astbury Allen took her two young daughters to England to wait out the outbreak as it swept across China, hoping they would reunite with her husband in Shanghai by Easter. It was a plan she would come to regret.

“I knew in my gut we were doing the wrong thing, but it was too late,” she said, weeping, as she described how she felt on landing at London’s Heathrow Airport. 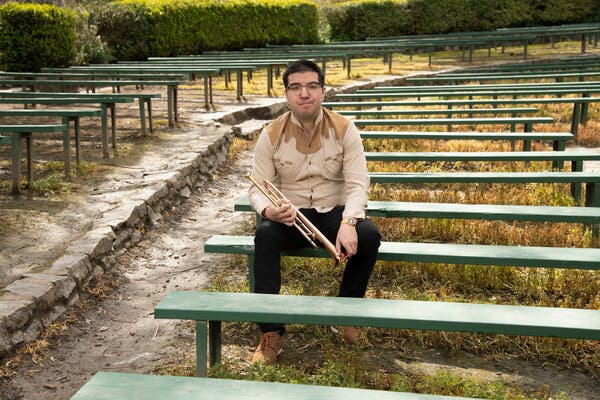 Abraham Sanchez, a Sacramento musician, put $1,200 of his stimulus money last week into his Robinhood trading account.Credit…Salgu Wissmath for The New York Times

For a decade before the pandemic, small investors accounted for roughly a tenth of trading activity in the stock market. But in the last year, they have become responsible for close to a quarter, according to Goldman Sachs analysts.

The speculative appetite of small investors may seem at odds with an economy still reeling from a pandemic that has killed more than half a million Americans, decimated jobs and snuffed out businesses and livelihoods. But one of the biggest tools deployed by the U.S. government to cushion the economic blow — stimulus payments — is also driving a huge surge in investing by small traders, Matt Phillips reports for The New York Times.

Analysts at Deutsche Bank recently estimated that as much $170 billion from the latest round of stimulus payments could flow into the stock market. They conducted a survey of retail traders in which respondents said they planned to put roughly 40 percent of any payment they received — or $2 of every $5 — into the stock market. Traders between the ages of 25 and 34 said they expected to put half of their stimulus check into stocks.

“That could lead to a bit more mania, speculation in the market,” said Patrick Fruzzetti, managing director and partner at Hightower Advisors, an investment firm. The “stimmies,” he said — using a popular online term for stimulus checks — will go into people’s trading accounts, and “they will trade.” 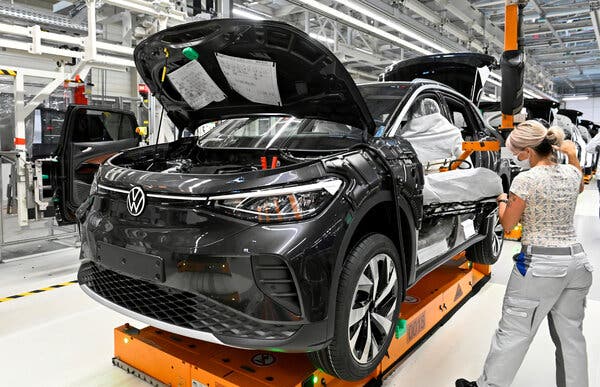 Volkswagen can spread the cost of developing new technologies over millions of vehicles and undercut Tesla on price.Credit…Matthias Rietschel/Reuters

In October 2015, a month after Volkswagen confessed to rigging diesel cars to conceal illegally high emissions, shellshocked company executives gathered in the brick-clad high-rise executive office building topped with a giant VW logo that looms over the carmaker’s main factory in Wolfsburg, Germany.

The executives authorized development of a collection of mix-and-match components that would serve as the basis for a range of electric models including sedans, S.U.V.s and vans, Jack Ewing reports for The New York Times. The standardized platform, called the Modular Electrification Toolbox, could also be used by other company brands, including Audi.

The platform will allow Volkswagen to exploit the big advantage it has over Tesla: size. With 665,000 employees and sales of 9.3 million vehicles last year, Volkswagen is the second-largest carmaker in the world after Toyota. It can spread the cost of developing new technologies over millions of vehicles and undercut Tesla on price.

The commitment Volkswagen made then is paying off now as the company rolls out a line of vehicles developed from the ground up to run on batteries, with more interior space and more appeal than adaptations of gasoline vehicles.

By 2025, Volkswagen will be able to produce electric vehicles for less than it costs to build a gasoline or diesel car, UBS analysts wrote in this month’s report. They cautioned that Tesla retained a significant lead in battery technology and autonomous driving software.