Target, a fixture in downtown Minneapolis, is giving up space in a large office building there, becoming the latest company to permanently allow its staff to spend more time working from home.

“This change is driven by Target’s longer-term headquarters environment that will include a hybrid model of remote and on-site work, allowing for flexibility and collaboration and ultimately, requiring less space,” the company said Thursday.

Office landlords across the country have been struggling to retain tenants as the pandemic drags on and companies realize their staff has been able to work effectively in a remote setting. Empty office buildings are putting a squeeze on city budgets, which are heavily reliant on property taxes.

Salesforce, the software company based in San Francisco, adopted a flex model in which most of its employees would be able to come into the office one to three days a week. In a bet that more people would work from home after the pandemic ends, Salesforce acquired the workplace software company Slack in December.

After the move, Target said it would still occupy about three million square feet of office space in the Minneapolis area.

“It’s not easy to say goodbye to City Center, but the Twin Cities is still our home after all these years,’’ Target’s chief human resources officer, Melissa Kremer, said in an email to employees.

Microsoft offices in Beijing. Microsoft owns LinkedIn, which has operated in China by conforming to the authoritarian government’s tight restrictions on the internet.Credit…Wu Hong/EPA, via Shutterstock

LinkedIn has stopped allowing people in China to sign up for new member accounts while it works to ensure its service in the country remains in compliance with local law, the company said this week, without specifying what prompted the move. A company representative declined to comment further.

Unlike other global internet mainstays such as Facebook and Google, LinkedIn offers a version of its service in China, which it is able to do by hewing closely to the authoritarian government’s tight controls on cyberspace.

It censors its Chinese users in line with official mandates. It limits certain tools, such as the ability to create or join groups. It has given partial ownership of its Chinese operation to local investors.

In 2017, the company blocked individuals, but not companies, from advertising job openings on its site in China after it fell afoul of government rules requiring it to verify the identities of the people who post job listings.

The backdrop to the suspension of new user registrations is not clear. The government has previously blocked internet services that it believes to be breaking the law. In 2019, Microsoft’s Bing search engine was briefly inaccessible in China for unclear reasons. Microsoft also owns LinkedIn.

U.S. stock dropped on Friday, with the S&P 500 pulling back from the record it set on Thursday, as bond yields jumped again.

The S&P 500 fell 0.5 percent in early trading, while the Nasdaq composite fell 1.5 percent.

On Thursday, President Biden promised that all adults would be eligible for a coronavirus vaccine by May 1, signaling a possible return to normality in the summer. As more businesses and services open up, the economy should also be feeling the effects of Mr. Biden’s nearly $1.9 trillion stimulus package, the American Rescue Plan, which he signed into law on Thursday. It provides another round of direct payments to American taxpayers, sending checks of up to $1,400, and more money for state and local governments and industries including airlines.

But so much good news has also fed into fears about inflation, or that central banks will begin to pull back on their stimulus measures, which have helped keep asset prices high.

Higher interest rates and tighter central bank policies are now considered to be the single biggest threat to so-called risk assets, mainly stocks, according to a Bank of America survey of fund managers.

Shoppers wait in line at an outlet mall in Southaven, Miss. on Saturday. Many Americans are set to benefit from the new economic relief plan.Credit…Rory Doyle for The New York Times

The economic relief plan that is headed to President Biden’s desk has been billed as the United States’ most ambitious antipoverty initiative in a generation. But inside the $1.9 trillion package, there are plenty of perks for the middle class, too.

An analysis by the Tax Policy Center published this week estimated that middle-income families — those making $51,000 to $91,000 per year — would see their after-tax income rise by 5.5 percent as a result of the tax changes and stimulus payments in the legislation. This is about twice what that income group received as a result of the 2017 Tax Cuts and Jobs Act.

Here are some of the ways the bill will help the middle class.

Americans will receive stimulus checks of up to $1,400 per person, including dependents.

The most significant change is to the child tax credit, which will be increased to up to $3,600 for each child under 6, from $2,000 per child. The credit, which is refundable for people with low tax bills, is $3,000 per child for children ages 6 to 17.

After four years of being on life support, the Affordable Care Act is expanding, a development that will largely reward middle-income individuals and families, since those on the lower end of the income spectrum generally qualify for Medicaid.

Because the relief legislation expands the subsidies for buying health insurance, a 64-year-old earning $58,000 would see monthly payments decline to $412 from $1,075 under current law, according to the Congressional Budget Office.

A rescue for pensioners

One of the more contentious provisions in the legislation is the $86 billion allotted to fixing failing multiemployer pensions. The money is a taxpayer bailout for about 185 union pension plans that are so close to collapse that without the rescue, more than a million retired truck drivers, retail clerks, builders and others could be forced to forgo retirement income.

The legislation gives the weakest plans enough money to pay hundreds of thousands of retirees their full pensions for the next 30 years. 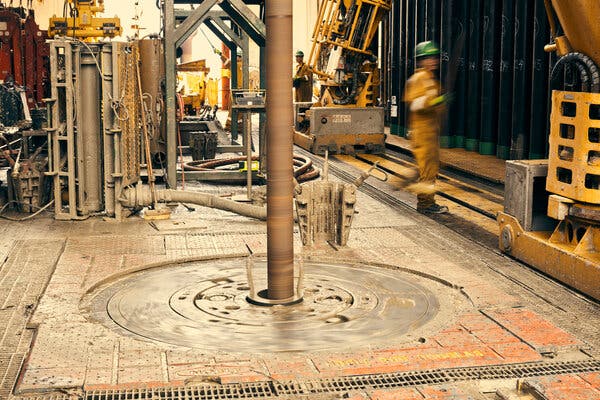 A drill ship contracted by ExxonMobil off the coast of Guayana in 2018. The temptation to produce more when prices rise has not disappeared completely, especially for countries like Guyana that want to pump as much oil as they can while oil is still valuable.Credit…Christopher Gregory for The New York Times

Even as they are making more money thanks to the higher oil and gasoline prices, industry executives pledged at a recent energy conference that they would not expand production significantly. They also promised to pay down debt and hand out more of their profits to shareholders in the form of dividends.

Even the Organization of the Petroleum Exporting Countries and allied producers like Russia surprised many analysts this month by keeping several million barrels of oil off the market, The New York Times’s Clifford Krauss reports. OPEC’s 13 members and nine partners are pumping roughly 780,000 barrels of oil a day less than at the beginning of the year even though prices have risen by 30 percent in recent months.

Chevron said this week that it would spend $14 billion to $16 billion a year on capital projects and exploration through 2025. That is several billion dollars less than the company spent in the years before the pandemic, as the company focuses on producing the lowest-cost barrels.

“So far, these guys are refusing to take the bait,” said Raoul LeBlanc, a vice president at IHS Markit, a research and consulting firm. But he added that the investment decisions of American executives could change if oil prices climb much higher. “It’s far, far too early to say that this discipline will last.” 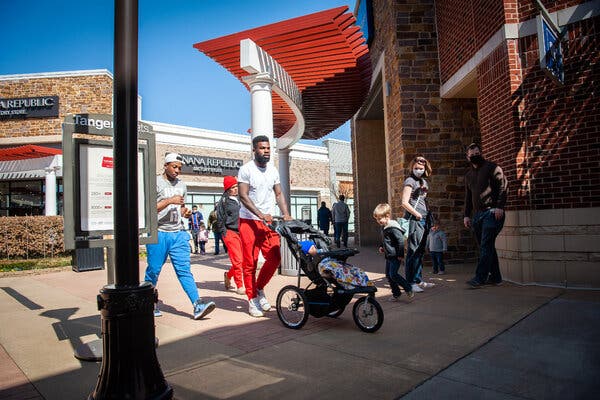 Shoppers in Southaven, Miss. Higher spending seems almost certain in the months ahead as vaccinations prompt Americans to get out and about, deploying savings.Credit…Rory Doyle for The New York Times

While the Biden administration’s stimulus bill, which will funnel nearly $1.9 trillion to American households, made its way through Congress, some politicians and economists began to raise concerns that it would unshackle a long-vanquished monster: inflation.

The worries reflect expectations of a rapid economic expansion as businesses reopen and the pandemic recedes. Millions are still unemployed, and layoffs remain high, The New York Times’s Nelson Schwartz and Jeanna Smialek report. But for workers with secure jobs, higher spending seems almost certain in the months ahead as vaccinations prompt Americans to get out and about, deploying savings built up over the last year.

Healthy economies tend to have gentle price increases, which give businesses room to raise wages and leave the central bank with more room to cut interest rates during times of trouble.

Over the long term, inflation can be a concern because it hurts the value of many financial assets, especially stocks and bonds. It makes everything from milk and bread to gasoline more expensive for consumers, leaving them unable to keep up if salaries stall. And once inflation becomes entrenched, it can be hard to subdue.

Inflation is expected to increase in the coming months as prices are measured against weak readings from last year. Analysts surveyed by Bloomberg expect the Consumer Price Index to hit an annual rate of 2.9 percent from April through June, easing to 2.5 percent in the three months after that before easing gradually to year-over-year gains of 2.2 percent in 2022, based on the median projection.

But those numbers are nothing like the staggering price increases of the 1970s, and evidence of renewed inflation is paltry so far.

He Was Coughing Up Blood. But His Lungs Looked O.K.