The annual letter to shareholders by JPMorgan Chase’s chief executive, Jamie Dimon, was published early Wednesday. The letter, which is widely read on Wall Street, is not just an overview of the bank’s business but also covers Mr. Dimon’s thoughts on everything from leadership lessons to public policy prescriptions.

“The U.S. economy will likely boom.” A combination of excess savings, deficit spending, vaccinations and “euphoria around the end of the pandemic,” Mr. Dimon wrote, may create a boom that “could easily run into 2023.” That could justify high stock valuations, but not the price of U.S. debt, given the “huge supply” soon to hit the market. There is a chance that a rise in inflation would be “more than temporary,” he wrote, forcing the Federal Reserve to raise interest rates aggressively. “Rapidly raising rates to offset an overheating economy is a typical cause of a recession,” he wrote, but he hopes for “the Goldilocks scenario” of fast growth, gently increasing inflation and a measured rise in interest rates.

“Banks are playing an increasingly smaller role in the financial system.” Mr. Dimon cited competition from an already large shadow banking system and fintech companies, as well as “Amazon, Apple, Facebook, Google and now Walmart.” He argued those nonbank competitors should be more strictly regulated; their growth has “partially been made possible” by avoiding banking rules, he wrote. And when it comes to tougher regulation of big banks, he wrote, “the cost to the economy of having fail-safe banks may not be worth it.”

“China’s leaders believe that America is in decline.” The United States has faced tough times before, but today, “the Chinese see an America that is losing ground in technology, infrastructure and education — a nation torn and crippled by politics, as well as racial and income inequality — and a country unable to coordinate government policies (fiscal, monetary, industrial, regulatory) in any coherent way to accomplish national goals,” he wrote. “Unfortunately, recently, there is a lot of truth to this.”

“The solution is not as simple as walking away from fossil fuels.” Addressing climate change doesn’t mean “abandoning” companies that produce and use fossil fuels, Mr. Dimon wrote, but working with them to reduce their environmental impact. He sees “huge opportunity in sustainable and low-carbon technologies and businesses” and plans to evaluate clients’ progress according to reductions in carbon intensity — emissions per unit of output — which adjusts for factors like size.

Other notable news (and views) from the letter:

This was Mr. Dimon’s longest letter yet, at 35,000 words over 66 pages. The steadily expanding letters — aside from a shorter edition last year, weeks after Mr. Dimon had emergency heart surgery — could be seen as a reflection of the range of issues top executives are now expected, or compelled, to address. 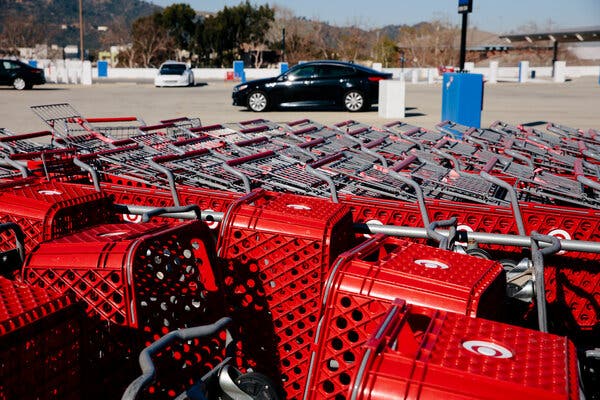 Target said its commitment added to its other moves to improve racial equity in the past year,.Credit…Kendrick Brinson for The New York Times

Target will spend more than $2 billion with Black-owned businesses by 2025, it announced on Wednesday, joining a growing list of retailers that have promised to increase their economic support of such companies in a bid to advance racial equity in the United States.

Target, which is based in Minneapolis, will add more products from companies owned by Black entrepreneurs, spend more with Black-owned marketing agencies and construction companies and introduce new resources to help Black-owned vendors navigate the process of creating products for a mass retail chain, the company said in a statement.

After last year’s protests over police brutality, a wave of American retailers, from Sephora to Macy’s, have committed to spending more money with Black-owned businesses. Many of them have joined a movement known as the 15 Percent Pledge, which supports devoting enough shelf space to Black-owned businesses to align with the African-American percentage of the national population.

Target’s announcement appears to be separate from that pledge. It said its commitment added to other racial-equity and social-justice initiatives in the past year, including efforts to improve representation among its work force. 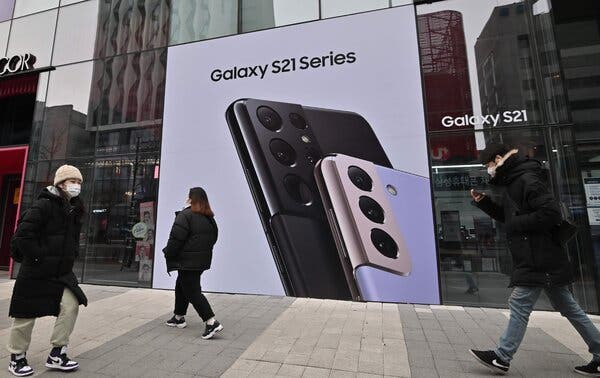 A Samsung store in Seoul. The company’s Galaxy S21 series of  phones have sold well in the United States since their introduction in January. Credit…Jung Yeon-Je/Agence France-Presse — Getty Images

Samsung’s sales grew by an estimated 17 percent in the first quarter from a year earlier, and operating profit increased by 44 percent, the company said on Wednesday. The South Korean electronics titan’s growth has been helped during the pandemic by strong demand for televisions, computer monitors and other lockdown staples.

The company released its latest flagship smartphones, the Galaxy S21 series, in January. In the United States, the devices handily outsold Samsung’s last line of premium phones in their first six weeks on the market, according to Counterpoint Research, which attributed the strong performance in part to Americans receiving stimulus payments.

Samsung’s handset business has also been buoyed of late by the U.S. campaign against Huawei, one of the company’s main rivals in smartphones. The Chinese tech giant’s device sales have plummeted because American sanctions prevent its phones from running popular Google apps and services, limiting their appeal to many buyers.

Another competitor, LG Electronics, said this week that it was getting out of the smartphone business to focus on other products.

Samsung’s first-quarter revenue was likely hurt by February’s winter storm in Texas, which caused the company to halt production for a while at its manufacturing facilities in Austin.

The company is expected to report detailed financial results later this month. 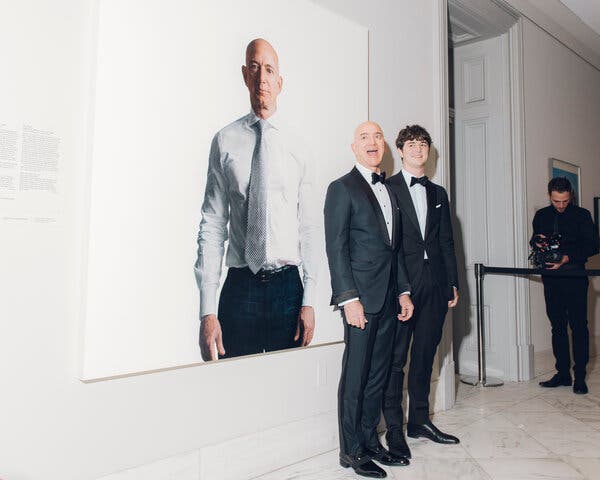 Jeff Bezos in 2019. He said in a statement on Tuesday that he applauded the Biden administration’s “focus on making bold investments in American infrastructure.”Credit…Jared Soares for The New York Times

Jeff Bezos, Amazon’s founder and chief executive, said on Tuesday that he supported an increase in the corporate tax rate to fund investment in U.S. infrastructure.

President Biden is pushing a plan to spend $2 trillion on infrastructure improvements, in part by raising the corporate tax rate to 28 percent, from its current rate of 21 percent.

Mr. Bezos said in a statement on Amazon’s corporate website that he applauded the administration’s “focus on making bold investments in American infrastructure.”

“We recognize this investment will require concessions from all sides — both on the specifics of what’s included as well as how it gets paid for (we’re supportive of a rise in the corporate tax rate),” Mr. Bezos said.

For years, Amazon has been a model for corporate tax avoidance, fielding criticism of its tax strategies from Democrats and former President Donald J. Trump. In 2019, Amazon had an effective tax rate of 1.2 percent, which was offset by tax rebates in 2017 and 2018, according to the Institute on Taxation and Economic Policy, a left-leaning research group in Washington. In 2020, the company paid 9.4 percent in taxes on U.S. pretax profit of about $20 billion, the group said.

The company has said in the past that it “pays all the taxes we are required to pay in the U.S. and every country where we operate.”

Companies employ varied strategies to reduce their tax liabilities. In 2017, the same federal bill that lowered the tax rate to 21 percent expanded tax breaks, including allowing the immediate expensing of capital expenditures. The goal was to lift investment, but the change also caused the number of profitable companies that paid no taxes to nearly double in 2018 from prior years. 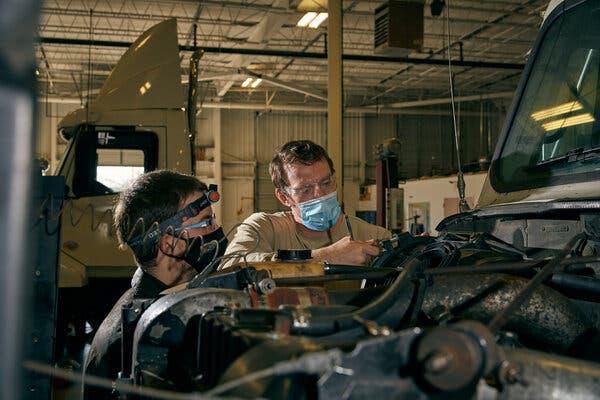 American Diesel Training, a school in Ohio that prepares people for careers as diesel mechanics, is part of a new model of work force training — one that bases pay for training programs partly on whether students get hired.

The students agree to an share about 5 percent to 9 percent of their income depending on their earnings. The monthly payments last four years. If you lose your job, the payment obligation stops.

Early results are promising, Steve Lohr reports for The New York Times, and experts say the approach makes far more economic sense than the traditional method, in which programs are paid based on how many people enroll. But there are only a relative handful of these pay-for-success programs. The challenge has been to align funding and incentives so that students, training programs and employers all benefit.

Social Finance, a nonprofit organization founded a decade ago to develop new ways to finance results-focused social programs, is seeking, designing and supporting new programs — for-profit or nonprofit — that follow the pay-for-success model.

“There is emerging evidence that these kinds of programs are a very effective and exciting part of work force development,” said Lawrence Katz, a labor economist at Harvard. “Social Finance is targeting and nurturing new programs, and it brings a financing mechanism that allows them to expand.” 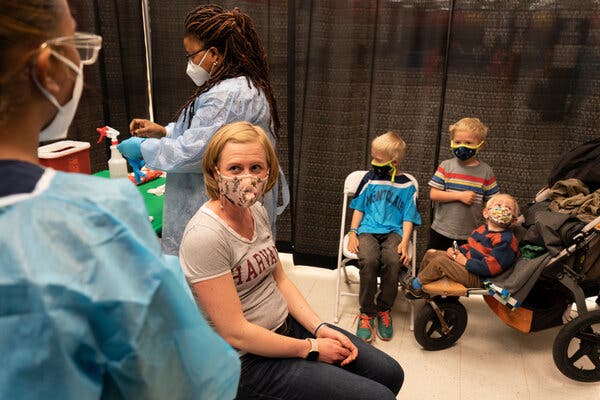 Major U.S. and European stock indexes hovered near record highs on Wednesday after a stream of mostly upbeat economic data and the progress on vaccinations.

The S&P 500 was unchanged in early trading, still within half a percentage point of a record reached on Monday. The Stoxx Europe 600 and DAX index in Germany both fell slightly after climbing to new highs on Tuesday.

On Tuesday, the International Monetary Fund upgraded its forecast for global economic growth and said some of the world’s wealthiest countries would lead the recovery, particularly the United States, where the economy is now projected to grow by 6.4 percent this year.

The rollout of vaccines is a major reason for the rosier forecast in some countries, the I.M.F. said. President Biden said that he wanted states to make all adults eligible for vaccines by April 19, two weeks earlier than his previous deadline. In Britain, the Moderna vaccine was administered for the first time on Wednesday, making it the third vaccine available.

Still, the I.M.F. warned on Tuesday against an unequal recovery because of the uneven distribution of vaccines around the world with some lower-income countries not expected to be able to vaccinate their populations this year.

The yield on U.S. 10-year bonds dropped for a third straight day to 1.64 percent, the lowest in two weeks, ahead of the release of minutes from the Federal Reserve’s mid-March meeting. Last month, policymakers released new economic projections that had the central bank’s interest rate near zero for several more years.

Oil prices fell with futures for West Texas Intermediate, the U.S. benchmark, dipping to $59.13 a barrel.