Gasoline prices rose as much as 4.2 percent early on Monday after a major petroleum pipeline in the United States was shut down over the weekend because of a cyberattack. The pipeline’s operator, Colonial Pipeline, hasn’t said when it will reopen, raising concerns about the infrastructure that carries nearly half of the fuel supplies for the East Coast.

By 7:30 a.m. Eastern Standard Time, futures of gasoline for June delivery were up 1.7 percent but still at the highest level since late 2018. The instability is contained to prices that traders pay for gasoline, but may affect prices at the pump in the coming weeks.

“Should the pipeline be brought online at the start of the week, the impact on prices should be limited,” Giovanni Staunovo, an analyst at UBS Global Wealth Management, wrote in a note. “However, a prolonged shutdown (5 days or longer) is likely to send gasoline prices higher, which already trade close to a 7-year high.”

Oil prices also rose. Futures on West Texas Intermediate, the U.S. crude benchmark, were up 0.6 percent to $65.29 a barrel, after climbing as much as 1.3 percent.

The increase in the price of gasoline and oil has added to what was already a boom in commodity prices. As economies from the United States to China have shown signs of strength, demand for raw materials to power industrial growth has risen. On Monday, iron ore futures rose as much as 10 percent and copper prices extended their record high.

A Bloomberg commodities index, which tracks the prices of 23 commodities from gold and oil to wheat and sugar, was at its highest level since mid-2015. Freeport-McMoRan, an American mining company, and United States Steel both rose more than 3 percent in premarket trading. 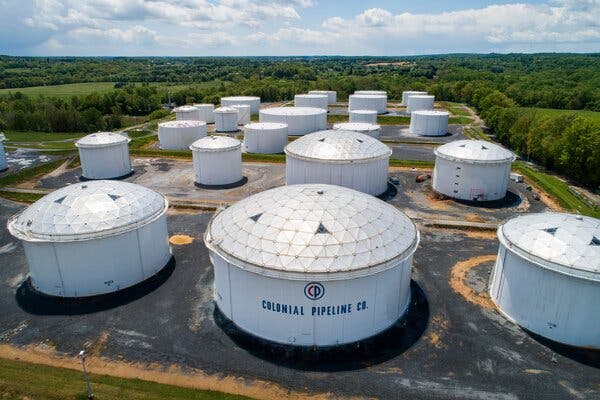 The operator of the largest petroleum pipeline between Texas and New York, shut down after a ransomware attack, declined on Sunday to say when it would reopen.

While the shutdown has so far had little impact on supplies of gasoline, diesel or jet fuel, some energy analysts warned that a prolonged suspension could raise prices at the pump along the East Coast and leave some smaller airports scrambling for jet fuel, Clifford Krauss reports for The New York Times.

Colonial Pipeline, the pipeline operator, said on Sunday afternoon that it was developing “a system restart plan” and would restore service to some small lines between terminals and delivery points but “will bring our full system back online only when we believe it is safe to do so.”

The company, which shut down the pipeline on Friday, has acknowledged that it was the victim of a ransomware attack by a criminal group, meaning that the hacker may hold the company’s data hostage until it pays a ransom. Colonial Pipeline, which is privately held, would not say whether it had paid a ransom. By failing to state a timeline for reopening on Sunday, the company renewed questions about whether the operations of the pipeline could still be in jeopardy.

The shutdown of the 5,500-mile pipeline was a troubling sign that the nation’s energy infrastructure is vulnerable to cyberattacks from criminal groups or nations.

Energy experts predicted that traders would view the company’s announcement on Sunday as a sign that the pipeline would remain shut at least for a few days.

Experts said several airports that depend on the pipeline for jet fuel, including Nashville, Tenn.; Baltimore-Washington; and Charlotte and Raleigh-Durham, N.C., could have a hard time later in the week. Airports generally store enough jet fuel for three to five days of operations.

White House officials held emergency meetings on the pipeline attack over the weekend. The White House press secretary, Jen Psaki, said in a tweet that they are looking for ways to “mitigate potential disruptions to supply.” 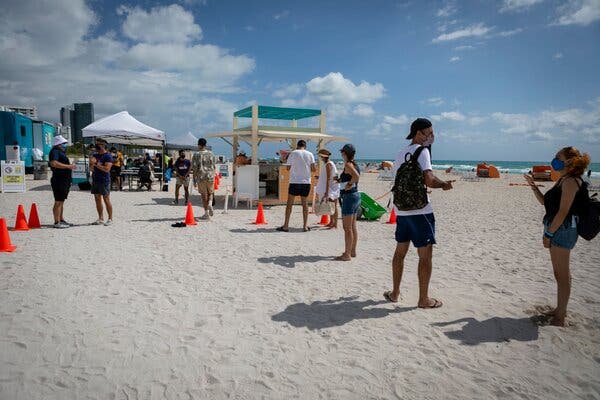 Last week, the DealBook newsletter wrote about one of the most vexing issues facing boardrooms: Should companies mandate that employees get vaccinated before returning to the workplace? Many readers shared opinions, personal experiences and suggestions for handling this complex issue. Here is a small selection, edited for clarity: 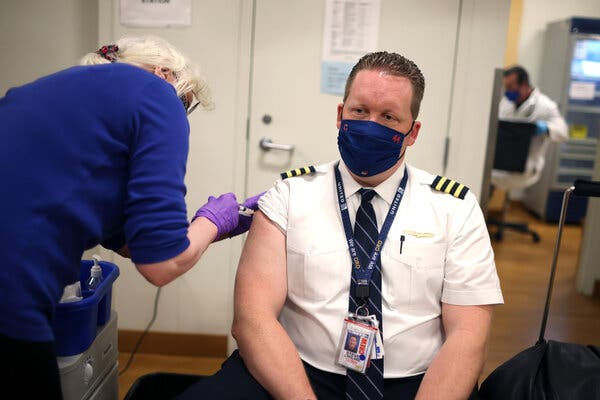 A United Airlines vaccine clinic at O’Hare Airport in Chicago. Employers are using on-site vaccinations to encourage workers to get shots.Credit…Scott Olson/Getty Images

As companies make plans to fully reopen their offices across the United States, they face a delicate decision. Many would like all employees to be vaccinated when they return, but in the face of legal and P.R. risks, few employers have gone so far as to require it.

Instead, they are hoping that encouragement and incentives will suffice, Gillian Friedman and Lauren Hirsch report for The New York Times.

Legally, companies seem largely in the clear. The Equal Employment Opportunity Commission issued guidance in December stating that employers are permitted to require employees to be vaccinated. But employers are still worried about litigation, in part because several states have proposed laws that would limit their ability to require vaccines.

“It would seem to me that employers are going to find themselves in a fairly strong position legally,” said Eric Feldman, a law professor at the University of Pennsylvania, “but that doesn’t mean they’re not going to get sued.”

So, companies are resorting to carrots over sticks. Darden offers hourly employees two hours of pay for each dose they receive. Target offers a $5 coupon to all customers and employees who receive their vaccination at a CVS at Target location. And many companies are hosting on-site clinics to make it easier to get vaccinated.

Others are experimenting with return-to-office policies that aren’t all or nothing. Salesforce will allow up to 100 fully vaccinated employees to volunteer to work together on designated floors of certain U.S. offices. Some companies are mandating the shots only for new hires. 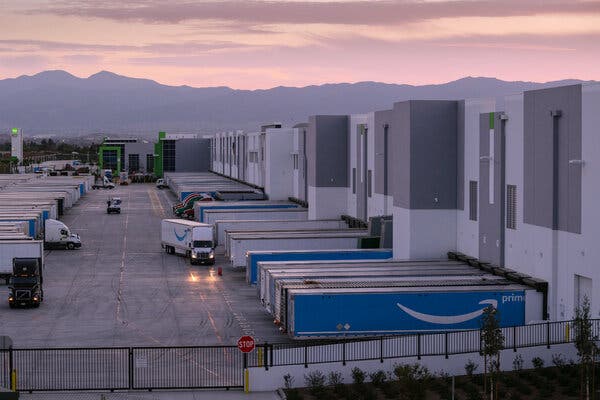 The Los Angeles area has the nation’s largest concentration of warehouses, contributing to some of the worst air pollution in the country.Credit…Philip Cheung for The New York Times

The South Coast Air Quality Management District in Southern California on Friday adopted a rule that would force about 3,000 of the largest warehouses in the area to slash emissions from the trucks that serve the site or take other measures to improve air quality, The New York Times’s Hiroko Tabuchi reports.

Southern California is home to the nation’s largest concentration of warehouses — a hub of thousands of mammoth structures, served by belching diesel trucks, that help feed America’s booming appetite for online shopping and also contribute to the worst air pollution in the country.

The rule sets a precedent for regulating the exploding e-commerce industry, which has grown even more during the pandemic and has led to a spectacular increase in warehouse construction.

The changes could also help spur a more rapid electrification of freight tucks, a significant step toward reducing emissions from transportation, the country’s biggest source of planet-warming greenhouse gases. The emissions are a major contributor to smog-causing nitrogen oxides and diesel particulate matter pollution, which are linked to health problems including respiratory conditions. 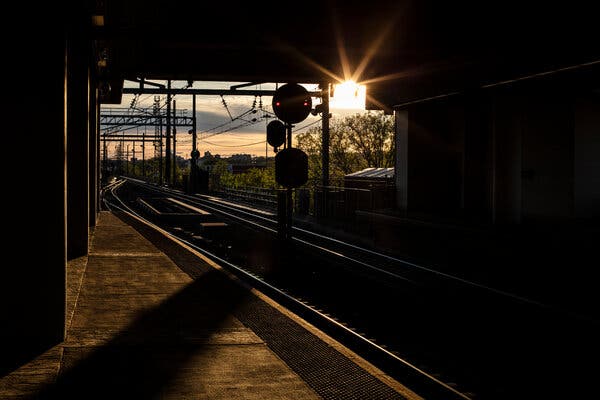 Empty platforms at the New Jersey Transit station in Secaucus in May.Credit…Bryan Anselm for The New York Times

Before the pandemic, the trains of New Jersey Transit could be cattle-car crowded, with strangers pressed so closely against you that you could deduce their last meal. That level of forced intimacy now seems unimaginable.

After the outbreak, ridership on New Jersey trains, which in normal times averaged 95,000 weekday passengers, plummeted to 3,500 before stabilizing at about 17,500. A similar pattern held for the Metropolitan Transportation Authority’s Metro-North and Long Island Rail Road lines: in February 2020, nearly 600,000 riders; two months later, fewer than 30,000.

For many months, the commuter parking lots were empty, the train stations closed, the coffee vendor gone. At night, the trains cutting through Croton-on-Hudson in Westchester or Wyandanch on Long Island or in Maplewood, N.J., were like passing ghost ships, their interior lights illuminating absence.

But in recent weeks, as more people have become vaccinated, New Jersey Transit and the M.T.A. have seen a slight uptick, to about a quarter of their normal ridership.

Perhaps this signals a gradual return to how things had been; or, perhaps, it is a harbinger of how things will be, given that many people now feel that they can work just as efficiently from home.

What is Discord? Chat service fosters community, expands beyond gaming

5 things to know before the stock market opens Monday, May 10