The stimulus payments would be $1,400 for most recipients. Those who are eligible would also receive an identical payment for each of their children.

To be eligible for a payment, a person must have a Social Security number.

Is there a partial payment for higher earners?

Yes. But payments would phase out quickly as adjusted gross income rises.

Payments for children decrease in the same way.

College students whom qualifying taxpayers claim as dependents are eligible. (They weren’t for past payments.) The payment would go to the parent taxpayer, not the child.

Do older relatives who live with us count as eligible dependents?

Good news here, too. If claimed as dependents, these relatives are also eligible this time. The payment would go to the qualifying taxpayer, not the dependent adult.

Which year of income determines eligibility?

The most recent year on record at the Internal Revenue Service. If you’ve already filed your taxes this year, it would be 2020. If not, it would be 2019.

During the last round of payments, the I.R.S. got the first payments out within a few days. As before, you would track the status of your payments via the I.R.S.’s Get My Payment tool. Be aware that the volume of users sometimes overwhelms the site.

What should I do if I still haven’t gotten a payment from a past round of stimulus?

If you were in fact eligible to receive it, you can try to recover it through the so-called Recovery Rebate Credit when filing your 2020 return. Make your claim on Line 30 of Form 1040 or 1040-SR.

Unemployment payments through multiple federal programs would be extended.Credit…Alex Hecht for The New York Times

If you’re already receiving unemployment benefits, payments would generally be extended for another 25 weeks, until Sept. 6. The weekly supplemental benefit, which is provided on top of your regular benefit, will remain $300 but run through Sept. 6.

Although unemployment benefits are taxable, the new law would make the first $10,200 of benefits tax-free for people with income less than $150,000. This applies to 2020 only.

How would the benefit extensions work?

The extended payments would continue to be delivered through different federal programs, largely based on the type of work you did and for whom.

Benefits through the Pandemic Unemployment Assistance program, which covers the self-employed, gig workers, part-timers and others who are typically ineligible for regular unemployment benefits, would be available for a total of 79 weeks, up from 50, and run through Sept. 6.

And benefits through the Pandemic Emergency Unemployment Compensation program, which essentially extends benefits for people who exhaust their regular state benefits, would be available for a total of 53 weeks, up from 24, also lasting through Sept. 6.

What happens to the supplemental payments?

If you qualify for any benefits, you would also receive the full $300 supplemental payment for weeks ending after March 14 and through Sept. 6. Known as F.P.U.C., it’s called the federal pandemic unemployment compensation.

The bill would also extend an extra $100 weekly payment, called the mixed-earner supplement, through Sept. 6. This payment helps people who have a mix of income from both self-employment and wages paid by other employers, because they are often stuck with a lower state-issued benefit based on their (lower) wages.

Would payments be uninterrupted?

If the bill becomes law, experts said, there may be a gap for beneficiaries in many states because it usually takes a couple of weeks for agencies to program any benefit extensions.

Buying insurance through the government program known as COBRA would temporarily become a lot cheaper.

COBRA, for the Consolidated Omnibus Budget Reconciliation Act, generally lets someone who loses a job buy coverage via the former employer. But it’s expensive: Under normal circumstances, a person may have to pay at least 102 percent of the cost of the premium.

Under the relief bill, the government would pay the entire COBRA premium from April 1 through Sept. 30.

A person who qualified for new, employer-based health insurance someplace else before Sept. 30 would lose eligibility for the no-cost coverage. And someone who left a job voluntarily would not be eligible, either.

Will the cost of health insurance I buy through an exchange be affected?

The bill would lower the cost of health insurance in many instances for people who bought their own health insurance via a government exchange. And the premiums for those plans would cost no more than 8.5 percent of your modified adjusted gross income.

These changes would be effective immediately and last through the end of 2022; they would not require people to re-enroll to access the lower prices.

If you don’t already have health insurance but would want it if the price was right, an open enrollment period is already in effect through May 15. You can also switch plans to try to lower the price you’re paying already or get more generous coverage. The Kaiser Family Foundation maintains a calculator that estimates your premiums based on your income and any available government subsidies, and it will be updated once the bill passes.

Are there any changes to health care flexible spending accounts?

None this time, though there were some in the last stimulus bill.

This credit, which helps working families offset the cost of care for children under 13 and other dependents, would be significantly expanded for a single year. More people would be eligible, and many recipients would get a bigger break.

The bill would also make the credit fully refundable, which means you could collect the money as a refund even if your tax bill was zero. “That will be helpful to people at the lower end” of the income scale, said Mark Luscombe, principal federal tax analyst at Wolters Kluwer Tax & Accounting.

How much would the credit be worth?

The new bill would make the credit worth up to $4,000 for one qualifying individual or $8,000 for two or more. The credit would be calculated by taking up to 50 percent of the value of eligible expenses, up to certain limits, depending on your income. (The more you earn, the lower the percentage you can claim.)

Currently, the credit is generally worth between 20 and 35 percent of eligible expenses with a maximum value of $2,100 for two or more qualifying individuals.

The bill would also significantly increase the income level at which the credit begins to be reduced. Under current law, that starts at an adjusted gross income of $15,000, but the bill would make the full value of the credit available to households making up to $125,000.

Under current law, the credit is not further reduced below 20 percent, regardless of income, Mr. Luscombe said. But the proposed law would begin to reduce the credit below 20 percent for households with income of more than $400,000.

These changes would be effective for 2021 only.

The bill would make one big change. For 2021 — and only for 2021 — you could set aside $10,500 in a dependent care account instead of the normal $5,000. But employers would have to allow the change: You can’t adjust the withholdings from your paycheck yourself if your employer declines to provide the option.

The bill would make the credit more generous for 2021, particularly for low- and middle-income people.

Would it change how the credit worked?

Here’s where it gets interesting: You could receive some of the credit as an advance on your 2021 taxes.

The bill would make the credit fully refundable, which means you can receive money from it as a tax refund even if your tax bill is reduced to zero. And half of that money could be advanced to households over the next six months (based on their 2020 tax information, or 2019 if that was unavailable). It’s not clear how frequently payments would be made — perhaps monthly — but under the bill they would begin in July.

The changes are effective for 2021 only, though at least some Democrats would like to make it permanent.

How would the advance payments work?

Should the bill become law, the advance payments would total up to half the value of the credit the household is eligible to receive. (The other half would be claimed on the 2021 return.) But exactly how often the payments would be sent out depends on what the Treasury Department decides is feasible.

For 2021 only, the bill would increase for childless households the size of the earned-income tax credit, which helps those at the lower end of the income scale, and make more taxpayers eligible.

The maximum credit amount for childless people would increase to $1,502, from $543.

The bill would also broaden the age range: People without children would be able to claim the credit beginning at age 19 instead of 25, with the exception of certain full-time students. The upper age limit, 65, would be eliminated.

How would separated spouses be affected?

Married but separated people could be treated as not married for the purpose of the credit if they don’t file a joint tax return.

This would apply only if the taxpayer lived with a qualifying child for more than half of the taxable year and didn’t have the same principal home as the spouse at least six months of the year. A separation decree or agreement would also suffice, as long as the individual didn’t live with the spouse by the end of the taxable year.

This change would be permanent.

Are there any other changes? 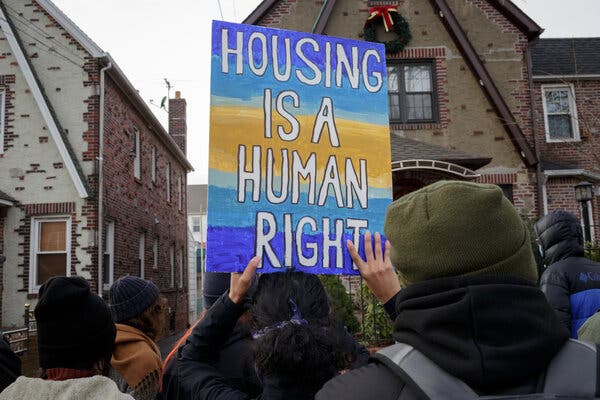 The bill would provide assistance to people in danger of being evicted and to help homeowners avoid foreclosure.Credit…Anna Watts for The New York Times

The bill would provide billions of dollars in rental and utility assistance to people who are struggling and in danger of being evicted from their homes.

About $27 billion would go toward emergency rental assistance. The vast majority of it would replenish the so-called Coronavirus Relief Fund, created by the CARES Act and distributed through state, local and tribal governments, according to the National Low Income Housing Coalition. That’s on top of the $25 billion in assistance provided by the relief package passed in December.

To receive financial assistance — which could be used for rent, utilities and other housing expenses — households would have to meet several conditions. Household income could not exceed 80 percent of the area median income, at least one household member must be at risk of homelessness or housing instability, and individuals would have to qualify for unemployment benefits or have experienced financial hardship (directly or indirectly) because of the pandemic.

Lower-income families that have been unemployed for three months or more would be given priority for assistance.

Is there anything for homeowners?

The bill would provide nearly $10 billion to help homeowners struggling with mortgage payments, utility bills and other housing costs.

Roughly $100 million would be dedicated to housing counseling.

How about homeless people?

About $5 billion would be allocated to help the homeless.

There would be a big one for people who already have debt.

You wouldn’t have to pay income taxes on forgiven debt if you qualify for loan forgiveness or cancellation — for example, if you’ve been in an income-driven repayment plan for the requisite number of years, if your school defrauded you or if Congress or the president wipes away $10,000 of debt for large numbers of people.