First-quarter earnings season picks up steam this week, with analysts expecting that profits for S&P 500 companies rose roughly 27 percent in the three months through March, compared with a year earlier when the pandemic sent corporate earnings into a tailspin.

Companies such as Coca-Cola, United Airlines, Netflix, AT&T and American Express all slated to issue results this week, offering a relatively well-rounded look at the state of corporate America in the early days of what could be a powerful year for the U.S. economy. It might also help set expectations for the stock market, after a big rally already this year.

The consensus among 76 economists polled by Bloomberg is that gross domestic product will expand by 6.2 percent in 2021, which would make it the best year for economic growth since 1984. And sentiment among analysts covering the stock market is almost universally bullish, given that strong economic tailwind.

“You’d almost have to be self-deceiving to expect U.S. companies overall to underperform consensus, given how the macro backdrop is driving revenues so well,” wrote John Vail, chief global strategist at Nikko Asset Management.

The expectations for profit growth are even more elevated for the current quarter: Analysts expect that the three months ending in June will see companies in the S&P 500 notch a 54-percent rise in profits, compared with the prior year.

That increase, of course, reflects a rebound from the worst of the pandemic-bred downturn. But it also is a result of “economic re-acceleration, and a rebound in commodity prices,” said Jonathan Golub, a stock market analyst at Credit Suisse.

Of course, if everyone is expecting such a surge in profits, the good news could already be fully incorporated into stock prices — and that means anything short of perfect results would make for a difficult stretch for stocks.

That has certainly been the case with some of the banks that reported earnings last week. Shares of Morgan Stanley, for example, dropped 2.8 percent on Friday even though the bank reported record revenue and profit.

That could mean the market is due for a pullback anyway. The index is relatively expensive by metrics such as the price-to-earnings ratio, which compares stock prices as a share of expected corporate profits over the next 12 months.

The S&P 500 is trading at nearly 23 times expected earnings. That’s roughly the valuation the index has held for most of the past year, but it’s very high by historical standards.

Over the last 20 years, the S&P 500 has traded at an average of 16 times expected earnings.

By comparison, a valuation of 23 times expected earnings is closer to where stock market valuations stood at the tail-end of the dot-com bubble of the late 1990s. When that ended, the S&P 500 fell roughly 50 percent before it hit bottom. 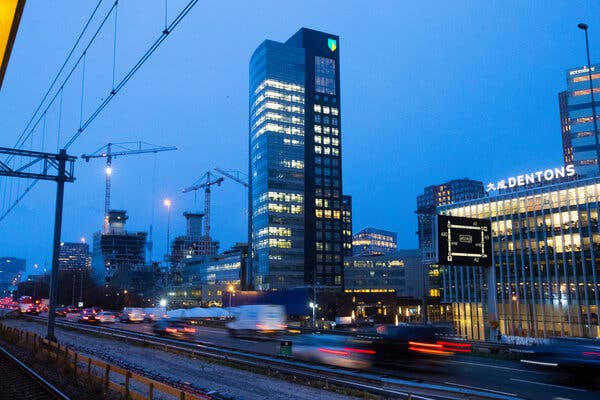 ABN Amro’s head office, center, in Amsterdam. An inquiry by Dutch authorities found the bank ignored signs that some clients were criminals using it as a conduit for dirty money.Credit…Peter Dejong/Associated Press

The Dutch bank ABN Amro said Monday that it would pay a $580 million fine to settle money laundering charges, prompting a former ABN manager to resign his new job as chief executive of Danske Bank after acknowledging he was a target in a related criminal investigation.

The resignation of Chris Vogelzang is an embarrassment for Danske Bank, Denmark’s largest bank, which hired him in 2019 to rebuild trust following a money laundering scandal there. Before becoming chief executive of Danske, Mr. Vogelzang had been a member of the management board of ABN Amro responsible for retail and private banking services.

Mr. Vogelzang acknowledged that Dutch authorities considered him a suspect in the investigation that led ABN Amro to agree to pay 480 million euros to settle money laundering charges. In numerous cases, according to a report by Dutch authorities, ABN Amro ignored warning signs that some clients were criminals using it as a conduit for dirty money.

Mr. Vogelzang said in a statement that he was “surprised” to learn that Dutch authorities consider him a suspect. During his time at ABN Amro, he said, “I managed my management responsibilities with integrity and dedication.”

Noting that Danske Bank remains under “intense scrutiny” because of money laundering at its former unit in Estonia, Mr. Vogelzang said he did “not want speculations about my person to get in the way of the continued development of Danske Bank.”

Gerrit Zalm, a member of Danske’s board who was chief executive of ABN Amro from 2009 to 2017, will also resign, the bank said. It did not give a reason.

Danske Bank admitted in 2018 that its headquarters and its Estonian branch, which it has since closed, failed for years to prevent suspected money laundering involving thousands of customers.

In the ABN Amro case, Dutch authorities found that the bank failed to act on obvious signs of illicit activity, including large cash transactions. In several cases, authorities said, the bank continued to serve clients whose criminal activities had been reported by the media, or who had a known history of fraud.

“As a bank we do not merely have a legal, but also a moral duty to do our utmost to protect the financial system against abuse by criminals,” Robert Swaak, the ABN Amro chief executive, said in a statement. “Regretfully, I have to acknowledge that in the past we have been insufficiently successful in properly fulfilling our important role as gatekeeper.”

More people are flying every day, as Covid restrictions ease and vaccinations accelerate. But dangerous variants have led to new outbreaks, raising fears of a deadly prolonging of the pandemic.

To understand how safe it is to fly now, The Times enlisted researchers to simulate how air particles flow within the cabin of an airplane, and how potential viral elements may pose a risk.

For instance, when a passenger sneezes, air blown from the sides pushes particles toward the aisle, where they combine with air from the opposite row. Not all particles are the same size, and most don’t contain infectious viral matter. But if passengers nearby weren’t wearing masks, even briefly to eat a snack, the sneezed air could increase their chances of inhaling viral particles.

How air flows in planes is not the only part of the safety equation, according to infectious-disease experts. The potential for exposure may be just as high, if not higher, when people are in the terminal, sitting in airport restaurants and bars or going through the security line.

“The challenge isn’t just on a plane,” said Saskia Popescu, an epidemiologist specializing in infection prevention. “Consider the airport and the whole journey.” 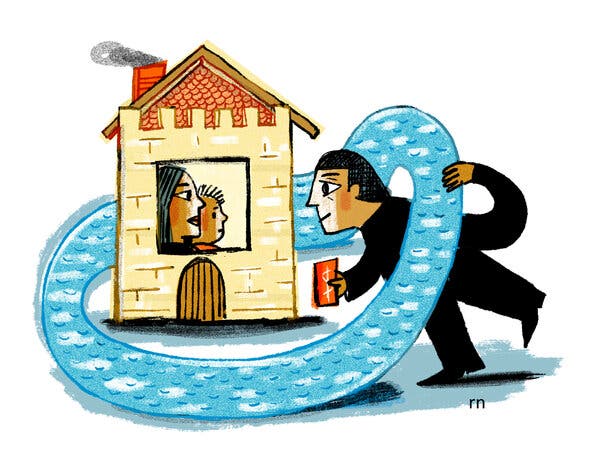 Members of the National Association of Realtors — the nation’s largest industry group, numbering 1.4 million real estate professionals — are challenging a moratorium on evictions put in place by the Centers for Disease Control and Prevention.

Both the Alabama and the Georgia Associations of Realtors sued the federal government over the matter, and the national association is paying for all of the legal costs. A hearing is scheduled for April 29, Ron Lieber reports for The New York Times.

The N.A.R. spends more money on federal lobbying than any other entity, according to the Center for Responsive for Politics. To puzzle out its actions and advocacy, let’s first be crystal clear about what the N.A.R. is and whose interests it serves. As its own chief executive boasted to members in 2017, it’s really the National Association for Realtors, not of them.

And of those million-plus members, according to the association, about 38 percent own at least one rental property. The N.A.R. isn’t shy about this, stating on the lobbying section of its website that it wants to “protect property interests.”

Why would it do this? The N.A.R. expert on the topic was unable to schedule a phone call, according to a spokesman.

But if you’re selecting a listing agent for your house from among their members, ask that person about this issue if you’re curious or concerned. Many of them have no idea what the N.A.R. is advocating on their behalf.

Credit…Illustration by The New York Times; Photo by Alexander Drago/Reuters

The cryptocurrency exchange Coinbase, the asset manager Fidelity, the payments company Square and the investment firm Paradigm have established a new trade group in Washington: The Crypto Council for Innovation. The group hopes to influence policies that will be critical for expanding the use of cryptocurrencies in conjunction with traditional finance, Ephrat Livni reports in the DealBook newsletter.

Cryptocurrencies are still mostly held as speculative assets, but some experts believe Bitcoin and related blockchain technologies will become fundamental parts of the financial system, and the success of businesses built around the technology may also invite more attention from regulators.

“We’re going to increasingly be having scrutiny about what we’re doing,” Brian Armstrong, Coinbase’s chief executive, said on CNBC. “We’re very excited and happy to play by the rules,” he added, but regulation of crypto should be on a “level playing field with traditional financial services.”

Here are four of the issues that will keep crypto lobbyists busy: 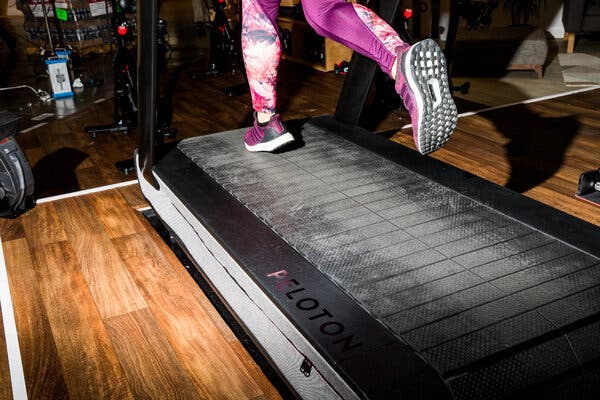 Peloton shares were lower in premarket trading after the U.S. Consumer Product Safety Commission issued a safety warning about the company’s treadmill.Credit…Roger Kisby for The New York Times

European stocks were mixed on Monday, and U.S. stock futures drifted lower, at the beginning of a week when hundreds of public companies will report earnings, including Coca-Cola, Netflix and United Airlines.

The Stoxx Europe 600 rose 0.1 percent, pushing further into record territory. The European index has climbed for the past seven weeks. On Wall Street, the S&P 500 hit a record on Friday after a string of strong economic reports and company earnings. On Monday, futures indicated it would open about 0.4 percent weaker.

European government bond yields climbed higher on Monday as investors awaited the European Central Bank’s latest monetary policy decisions, which will be announced on Thursday. Last month, the central bank said it would quicken the pace of its asset purchases to tamp down an increase in bond yields.