Studio Woojai turns waste paper into bricks and furniture
Eindhoven-based studio Woojai is run by Korean New Zealander WooJai Lee, a designer who is motivated to explore and experiment with the hidden potential of sometimes surprising materials. In particular, we took up a project in which waste paper is converted into functional bricks and sculptural furniture. 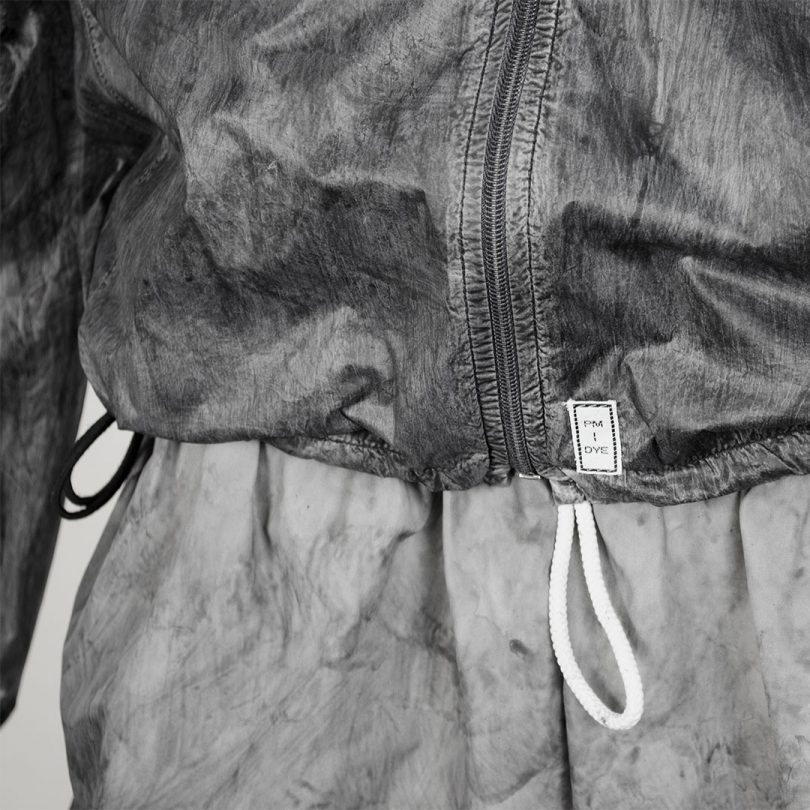 Tino Seubert transforms air pollution into art + usable products
London-born product designer Tino Seubert draws on history and contemporary art as well as science and materials research to create products that make a statement. For The Color of Air, he took air pollution and turned it into ink and dye, which he used to create screen-printed artwork, pencils, and clothing to demonstrate that even invisible airborne debris can turn into something less harmful and more meaningful. We caught up with him to find out more.

Susana Godinho transforms waste + cork into carpets
Portuguese designer Susana Godinho founded Sugo Cork Rugs in 2017. With a modern design, she combines the performance of highly sustainable cork with recycled and reclaimed fabrics from the fashion and textile industries. The brand, based in the north of Portugal, is not only committed to harmony with nature, but also offers employment opportunities for people with disabilities. 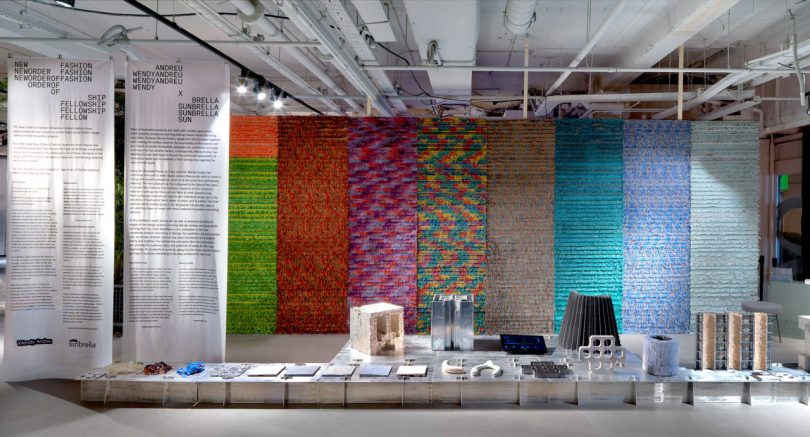 Wendy Andreu transforms edges into innovative new material
Paris-based designer Wendy Andreu uses materials as a means of communication and experiments to find surprising results that can be translated into proposals for functional design. She worked with high-performance fabric maker Sunbrella to turn its scrap edges into a new innovative material – the woven or knitted edges of rolls of textile that are normally thrown away.

Sabai turns recycled fibers + bottles into affordable sofas
Caitlin Ellen and Phantila Phataraprasit founded Sabai Design when they discovered a niche in the market for a sofa that looked good, lived up to their sustainability values, and was affordable enough for someone starting a home for the first time. They launched two sofas and an ottoman with a range of fabric options (the velvet is made from 100% recycled PET bottles) and a ‘closed loop promise’ that guarantees they will buy their sofas back (from New York customers at 20)% cost, within three years of purchase) to keep them out of landfill. We met Ellen to find out more.

Daniel Svahn transforms waste furniture into new furniture
Stockholm-based product and interior designer Daniel Svahn founded his studio of the same name after graduating from Beckmans Collage of Design with a BFA in product design in 2009. He attributes his inspiration to the everyday things we see all around us – whether “small or large, relevant or irrelevant, nice or ugly”. He believes that anything can be made new if you are attentive enough and keep your imagination alive. True to his word, A New Paradigm – a further development of the New Goodies but Oldies project that he unveiled at the 2020 Stockholm Furniture Fair – is a collection of six contract furniture made from furniture thrown away by the same industry. 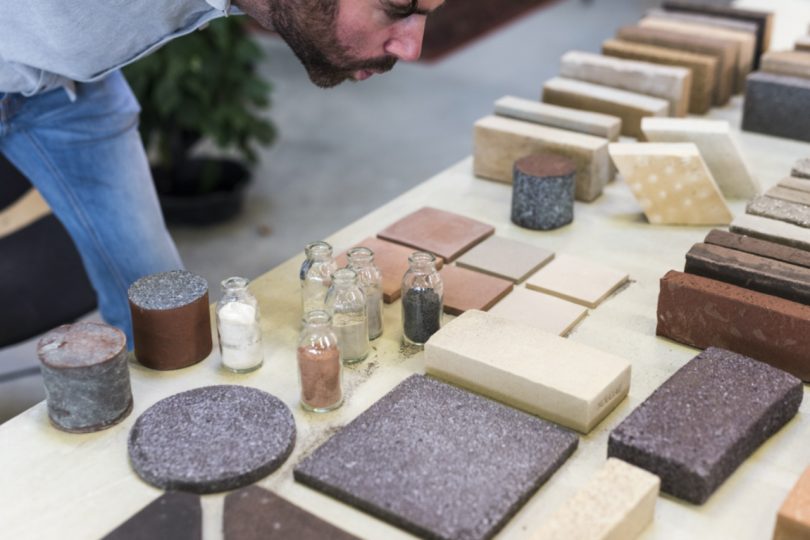 StoneCycling turns industrial and demolition waste into bricks
When Tom van Soest was a student at the Design Academy Eindhoven in the Netherlands, he developed a method of upcycling waste that he had found in nearby empty buildings and was waiting to be demolished. He ground, shredded and mixed this debris in a homemade industrial mixer and after much trial and error he found a way to create new materials that were both resilient and pleasing. After graduating, he founded StoneCycling with his long-time friend Ward Massa to build on his “WasteBasedBrick”, which was officially launched in 2015. The bricks are now appearing in buildings, in private homes and offices, in Starbucks and Cos stores from Amsterdam to New York. We spoke to Massa to find out more. 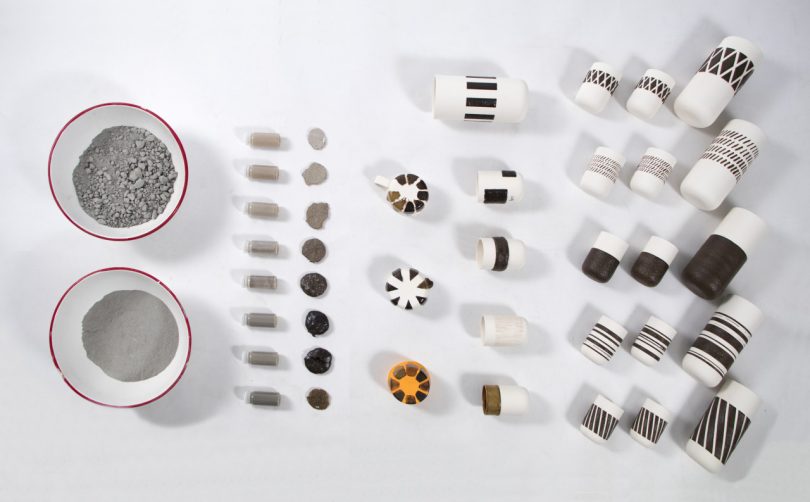 Studio rope transforms dust from stone processing into ceramic glazes
Hiroyuki Morita founded Studio Rope in 2017 while he was doing his Masters at ECAL Switzerland. “Design connects many relationships in our own lives, just like rope ties a knot,” he explains the core philosophy of the studio. He believes that design is just as much about building strong bonds and flexible partnerships with customers, craftsmen, manufacturers and users as it is about creating objects. His Stone Pottery collection is just one example. In close collaboration with stone factories, he was able to transform their waste dust into a unique glaze that gives a porcelain coffee set heat-insulating and tactile properties. 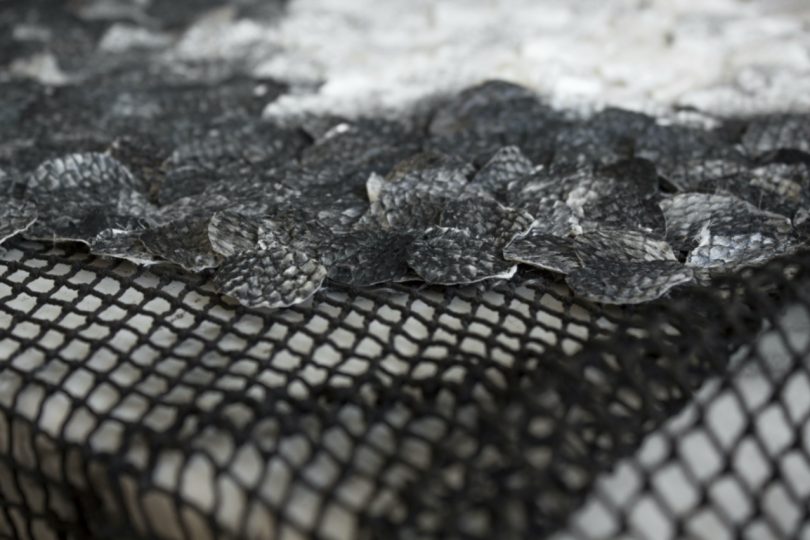 Studio Nienke Hoogvliet transforms seaweed and fish skin into carpets, fabrics + leather
Studio Nienke Hoogvliet, based in The Hague in the Netherlands, is a design studio that specializes in materials research, experimental and conceptual design. Nienke Hoogvliet founded the studio in 2013 and has been supported by Tim Jongerius ever since. The couple is now involved in freelance projects as well as in research and design projects initiated by themselves that raise awareness of social and ecological problems in the textile, leather and food industries. By creating innovative material alternatives, they hope to change both perspectives and systems. 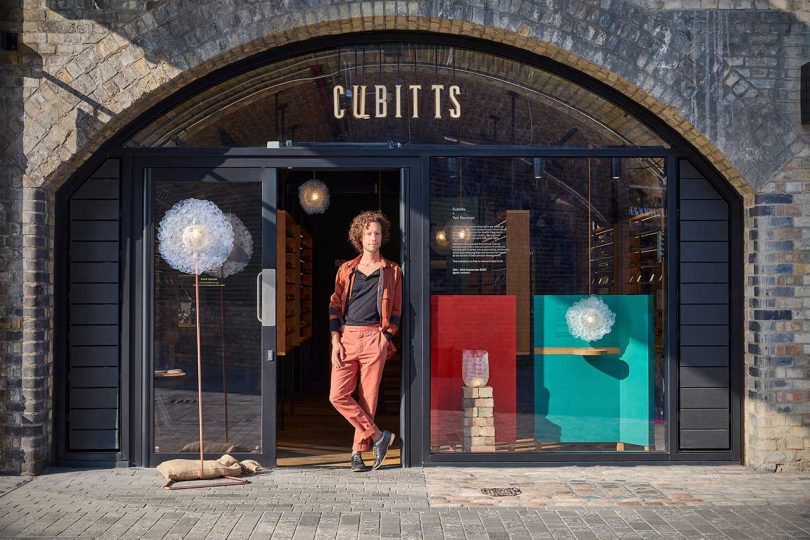 Yair Neuman transforms glasses into the Lighting Collectioncubitt
Yair Neuman is a London-based designer and entrepreneur who seeks opportunities for sustainable design while minimizing the environmental impact of everything he produces and designs. His latest collection was developed in collaboration with the eyewear brand Cubitts. As in most eyewear stores, Cubitts eyeglass frames are displayed with dummy plano lenses that are replaced with corrective lenses after the customer purchases them. The average high street eyewear store throws away 200 such lenses every week. Neuman transforms these lenses, otherwise destined for landfill, into polycarbonate sheet materials, which he used to create an eye-catching lighting collection called Lens Light, which was recently launched during the London Design Festival. 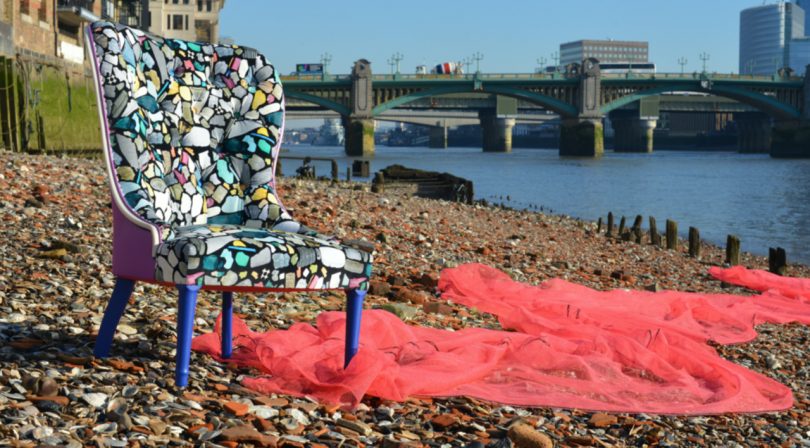 Ella Doran turns plastic waste into an upholstered chair with a message
Award-winning London designer Ella Doran started her homeware business in the late 1990s and quickly won fans and praise for her pioneering application of photo-based images and patterns to functional household products. Her involvement in the RSA’s Great Recovery Project – and in particular in the restoration of a sofa that only had to be dumped because the fire label had been removed – sparked renewed interest in and commitment to the circular economy. We talked to her about her latest project, the Clean Up Plastic Camo Chair. 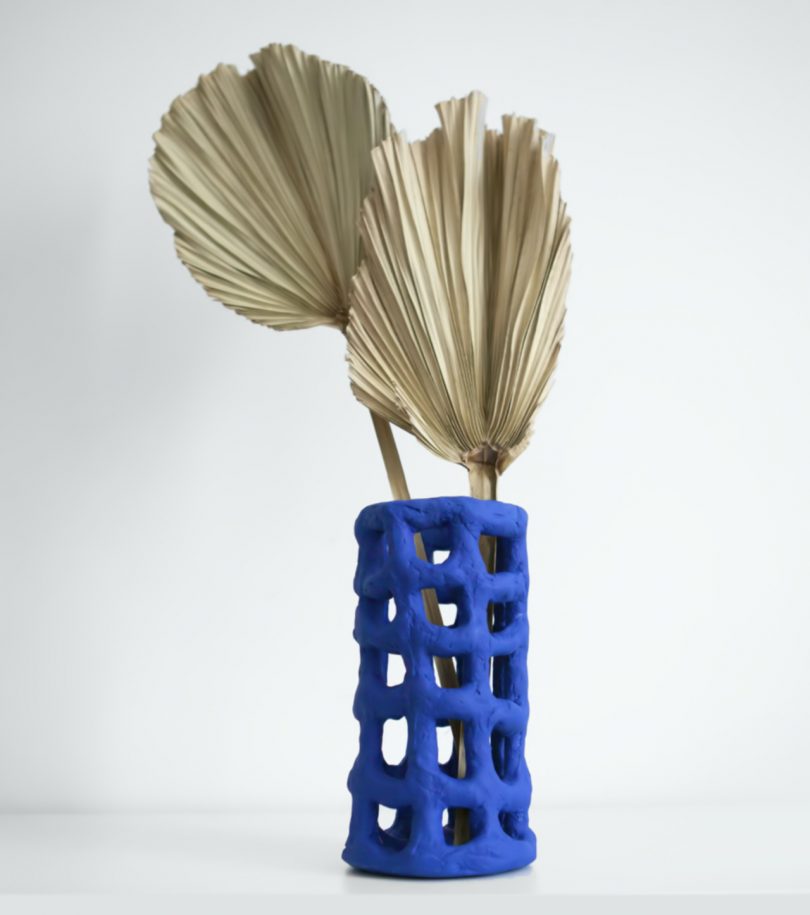 Jacqueline de la Fuente transforms waste paper + cardboard into sculptural vases
UK-based artist and designer Jacqueline de la Fuente was inspired when she had children to make sculptural vases out of recycled paper and cardboard – from the increase in waste her family was now generating, to experimenting with paper mache next to them, to lack to leave them the legacy of a healthier planet to grow up on. In her Atelier De La Jardin she now produces eye-catching decorative objects by hand, which are sought after by interior designers as well as by private collectors. We spoke to Jacqueline to find out more. 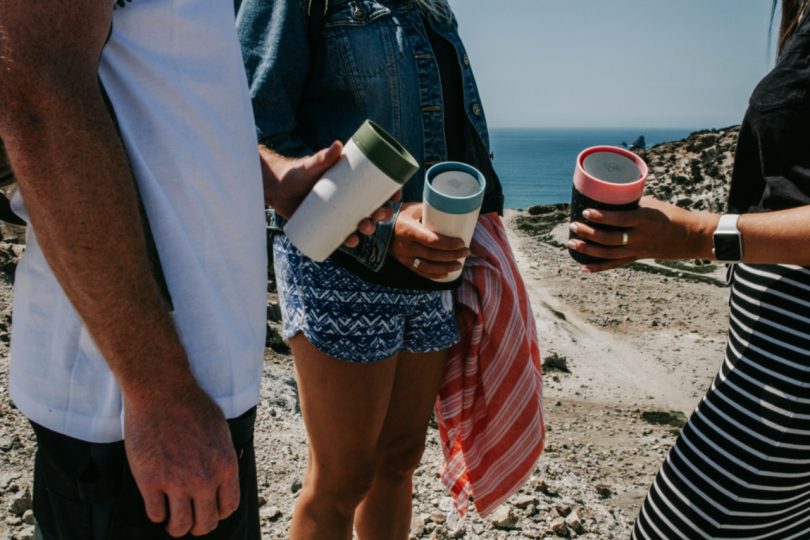 Circular & Co Turn discarded disposable coffee cups into reusable ones
Former Dyson inventor Dan Dicker founded the precursor to Circular & Co. in his garden shed in the far south west of the UK in 2003. The Circular Cup is the latest in a line of innovative products that recycle waste and create value from materials that were once intended for landfill – 17 years later, Dan estimates that his company prevented 187 million disposable cups from ending up in waste streams. We caught up with him to find out more. 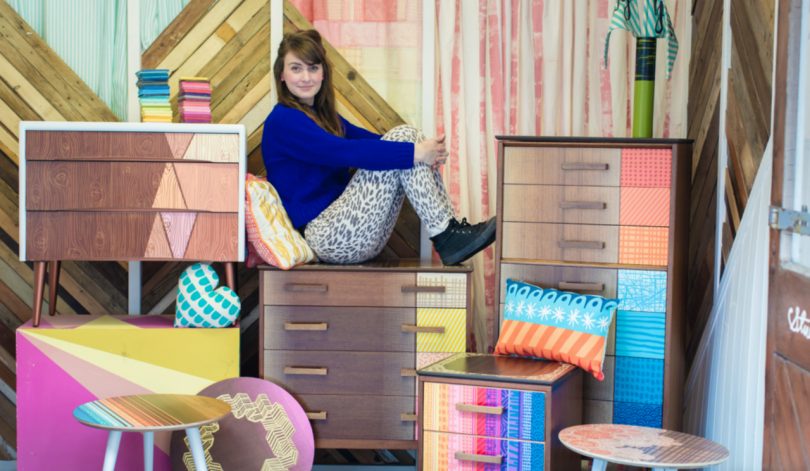 Zoe Murphy transforms unloved furniture, wood and textiles into lively home accessories
British designer Zoe Murphy advocates the idea of ​​“loving what is yours” by printing on recycled furniture and textiles, using images taken from the faded splendor of her seaside hometown, Margate, Kent South coast of England, are inspired. Zoe graduated from Loughborough University in 2008 with a first class degree in printed textiles. She has always been intrigued by the potential for reusing and rejuvenating unwanted items and works closely with the idea of ​​encouraging others to consume with greater care.