Outside a cryptocurrency exchange in Istanbul. Dozens of online cryptocurrency trading platforms have sprung up in Turkey in recent years, and the business is little regulated.Credit…Chris Mcgrath/Getty Images

Turkish authorities arrested four employees of a cryptocurrency trading platform on suspicion of fraud after customer accounts were frozen, authorities said, the second collapse of a digital currency firm in Turkey within a week.

The collapse of Vebitcoin, one of dozens of cryptocurrency trading platforms that have sprung up in Turkey in recent years, came after the Thodex trading platform shut down last week, more than 60 of its employees were arrested, and its chief executive left the country.

Vebitcoin was a relatively small operation and the losses from it are unlikely to be big, said Turan Sert, who advises BlockchainIST, a cryptocurrency research center affiliated with Bahcesehir University in Istanbul.

Ilker Bas, the chief executive of Vebitcoin, told police after his arrest that the platform has 90,000 registered users and had a trading volume of 600 million lira to 800 million lira, or $72 million to $96 million, per month, the private news agency Demiroren reported. Customer losses are probably much smaller, because the same assets are typically traded repeatedly during the course of a month.

“Due to the recent developments in the crypto money industry, our transactions have become much more intense than expected,” Vebitcoin said on its website. “We have decided to cease our activities in order to fulfill all regulations and claims.”

Cryptocurrency trading is little regulated in Turkey, and the number of platforms has proliferated because of the relatively low cost of setting up. Off-the-shelf trading software costs around $100,000, said Mr. Sert, who also advises Paribu, one of the largest cryptocurrency trading platforms.

The phenomenon is by no means limited to Turkey. Cryptocurrencies like Bitcoin or Dogecoin have attracted the attention of serious investors and become a hot topic on Wall Street. Coinbase, a U.S.-based cryptocurrency trading platform, sold shares to the public for the first time this month and is valued by the stock market at $58 billion. Regulators in the United States and other countries have struggled to keep up with the fast growth of digital money.

The Turkish Central Bank barred the use of cryptocurrencies for purchases this month, citing their riskiness and popularity with criminals, and signaled that more regulation of the sector is coming. The prospect of greater scrutiny could be prompting some platforms to shut down, Mr. Sert said.

Customers of Thodex may have lost $2 billion, a lawyer for the firm’s clients said last week, but Mr. Sert said that figure probably referred to the site’s trading volume and greatly overstated the potential losses. Many platforms exaggerate their trading volume to attract customers, he said.

The total losses to cryptocurrency investors, while devastating to some individuals, are not large enough to push Turkey’s already shaky economy into crisis, Mr. Sert said.

“I don’t think this will create any instability in the system,” he said.

The gap between executive compensation and average worker pay has been growing for decades. Chief executives of big companies now make, on average, 320 times as much as their typical worker, according to the Economic Policy Institute. In 1989, that ratio was 61 to 1.

The pandemic compounded these disparities, as hundreds of companies awarded their leaders pay packages worth significantly more than most Americans will make in their entire lives, David Gelles reports for The New York Times.

In the course of his reporting, corporate public relations teams employed various tactics to justify their bosses’ big paydays: 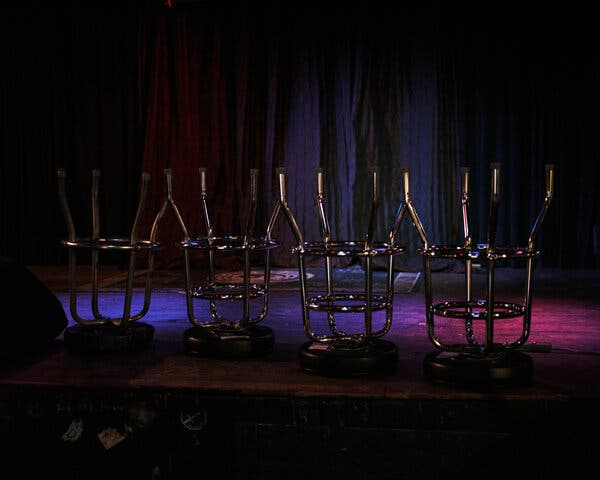 Music club operators, theater owners and others in the live-event market have been waiting nearly four months for a $16 billion federal grant fund for their industry to start taking applications. Their hopes were briefly raised two weeks ago when the program’s application website opened, then dashed as a technical malfunction prevented the site from accepting any applications.

Now, the Small Business Administration, the federal agency that runs the program, plans to try again on Monday at noon — but only after one last round of confusion and frustration.

Late Thursday, the agency announced that it would reopen its application system for the Shuttered Venue Operators Grant on Saturday. After heavy pushback from angry applicants — especially Jewish business owners who do not use electronics on Saturdays in observation of the Sabbath — the agency changed course Friday night and rescheduled the reopening for Monday.

“We understand the challenges a weekend opening would bring, and to ensure the greatest number of businesses can apply for these funds, we decided to reschedule,” the agency said in a statement. “We remain committed to delivering economic aid to this hard-hit sector quickly and efficiently.”

The money will be awarded on a first-come-first-served basis and is widely expected to run out fast. That means many applicants will feel pressure to submit paperwork as soon as the application system opens — even if it is at an inconvenient time.

Applicants were generally relieved by the shift to Monday, but annoyed by the whiplash.

“It’s been a mess on so many levels. I feel like they’re torturing us,” said Dani Zoldan, the owner of Stand Up NY, a comedy club in Manhattan. Mr. Zoldan is Jewish and had been vocal on Twitter about the obstacles of a Saturday start.

The National Independent Venue Association, an industry group that lobbied for the relief fund, said it endorsed the decision to postpone the start.

“While we’re all anxious to apply as soon as possible, we support the S.B.A.’s decision to reopen the portal Monday and encourage a fair and equitable process for all,” said Audrey Fix Schaefer, a spokeswoman for the group. “The S.B.A. has responded to our desperate need and we’re grateful for that.”

The Small Business Administration is also preparing to open a second grant program, the Restaurant Revitalization Fund, which is a $28.6 billion support fund for bars, restaurants and food trucks. That program is planning a seven-day test to help the agency avoid the kind of technical problems that plagued the venue program. 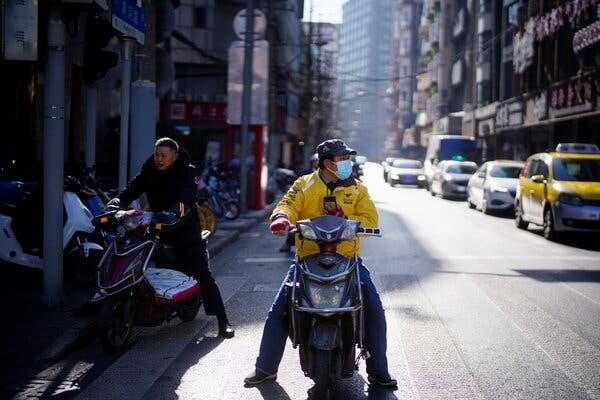 A Meituan delivery worker in Shanghai. Last year the firm made more than 27 million food-delivery transactions per day.Credit…Aly Song/Reuters

China’s fast-moving campaign to rein in its internet giants is continuing apace with an antitrust investigation into Meituan, a leading food-delivery app.

The investigation, which the country’s market regulator announced with a terse, one-line statement on Monday, focuses on reports that the company blocked restaurants and other merchants on its platform from selling on rival food-delivery sites.

Earlier this month, the regulator imposed a record $2.8 billion fine on the e-commerce titan Alibaba for exclusivity requirements of this sort. In a statement on Chinese social media, Meituan said that it would cooperate with the authorities and that its operations were continuing as usual.

Meituan is a powerhouse in China. It made more than 27 million food-delivery transactions a day last year and reported around $18 billion in revenue, making it larger than Uber by sales. Meituan’s main rival in takeout delivery in China is Ele.me, a service owned by Alibaba.

Alibaba has been an early major target in China’s efforts to curb what officials describe as unfair competitive practices in the internet industry. But Beijing has made clear that it will be keeping a much closer eye on all of the sector’s biggest and richest companies.

Meituan was one of 34 Chinese internet firms that were summoned to meet with the antitrust authority this month. The following day, the regulator began publishing on its website statements from the companies, Meituan included, in which they vowed to obey laws and regulations. 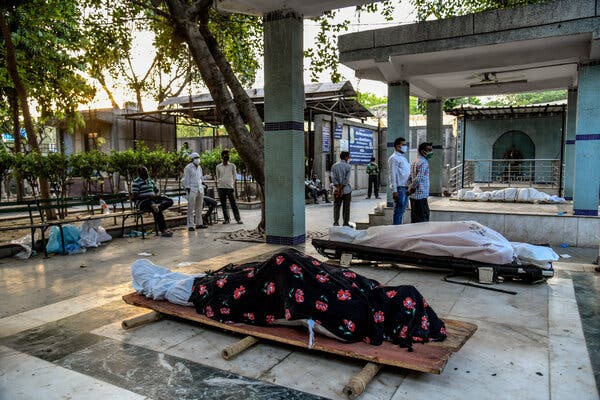 NEW DELHI — With a devastating second wave of Covid-19 sweeping across India and lifesaving supplemental oxygen in short supply, India’s government on Sunday said it had ordered Facebook, Instagram and Twitter to take down dozens of social media posts critical of its handling of the pandemic.

The order was aimed at roughly 100 posts that included critiques from opposition politicians and calls for Narendra Modi, India’s prime minister, to resign. The government said that the posts could incite panic, used images out of context and could hinder its response to the pandemic.

The companies complied with the requests for now, in part by making the posts invisible to those using the sites inside India. In the past, the companies have reposted some content after determining that it didn’t break the law.

The takedown orders come as India’s public health crisis spirals into a political one, and set the stage for a widening struggle between American social media platforms and Mr. Modi’s government over who decides what can be said online.

On Monday, the country reported almost 353,000 new infections and 2,812 deaths, marking the fifth consecutive day it set a world record in daily infection statistics, though experts warn that the true numbers are probably much higher. The country now accounts for almost half of all new cases globally. Its health system appears to be teetering. Hospitals across the country have scrambled to get enough oxygen for patients.

In New Delhi, the capital, hospitals this weekend turned away patients after running out of oxygen and beds. Last week, at least 22 patients were killed in a hospital in the city of Nashik, after a leak cut off their oxygen supplies.

Online photos of bodies on plywood hospital beds and the countless fires of overworked crematories have gone viral. Desperate patients and their families have pleaded online for help from the government, horrifying an international audience.

Mr. Modi has been under attack for ignoring the advice of experts about the risks of loosening restrictions, after he held large political rallies with little regard for social distancing. Some of the content now offline in India highlighted that contradiction, using lurid images to contrast Mr. Modi’s rallies with the flames of funeral pyres. 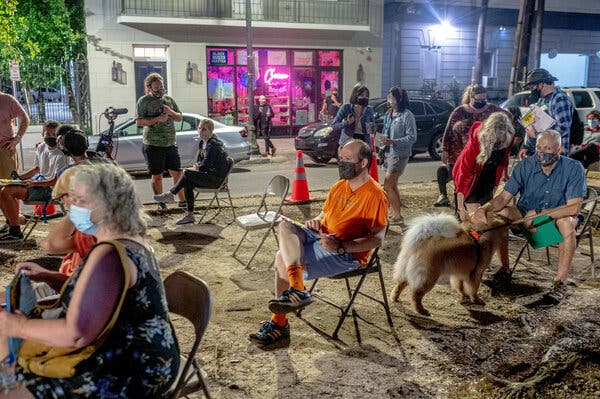 People waiting to get vaccinated in New Orleans this month.Credit…Emily Kask for The New York Times

More than five million Americans, or nearly 8 percent of those who got a first shot of the Pfizer or Moderna vaccines, have missed their second doses, according to the most recent data from the Centers for Disease Control and Prevention. That is more than double the rate among people who got inoculated in the first several weeks of the nationwide vaccination campaign.

Even as the country wrestles with the problem of millions of people who are wary about getting vaccinated at all, local health officials are confronting a new challenge of ensuring that those who do get inoculated are doing so fully, Rebecca Robbins reports for The New York Times.

The reasons that people are missing their second shots vary. In interviews, some said they feared the side effects, including flulike symptoms, which were more common and stronger after the second dose. Others said they felt that they were sufficiently protected with a single shot.

Those attitudes were expected, but another hurdle has been surprisingly prevalent. A number of vaccine providers have canceled second-dose appointments because they ran out of supply or didn’t have the right brand in stock.

Walgreens, one of the biggest vaccine providers, sent some people who got a first shot of the Pfizer or Moderna vaccine to get their second doses at pharmacies that had only the other vaccine on hand.

Several Walgreens customers said in interviews that they scrambled, in some cases with help from pharmacy staff members, to find somewhere to get the correct second dose. Others, presumably, simply gave up.

Crohn’s Disease Is on the Rise

WHO says delta is becoming the dominant Covid variant…